After going through all the traditional choices our team moved to the last brewery bar where we reconfirmed our love for Five Points’ XPA and we also had a reminiscing moment tasting Brew 61’s Greenfields Gold that we used to stock in bottles. Next in line was the bar named after Ben Nevis. We had a lovely session tasting Andwell’s Gold Muddler, a lovely hoppy pale ale named after a fly-fishing lure used to catch trout. We very often stock the cask version and their King John and Resolute bitter at our Northumberland Arms pub in Brentford. Ben Nevis also poured Jaw’s Wave which we used to sell in bottles, alongside Drop which is currently available at TippleHub. The next bar was the Caernarfon Castle, which was like a fountain of discoveries for us. We were privileged enough to enjoy so many new beers such as Avid Brewing’s Raspberry Ripple Ice Cream Pale, Brew York’s Juice Forsyth, and Zest’s Atomic IPA. We probably had had a few beers too many by then but we had the same feeling at the Angel of the North stand where we stumbled upon so many new to us brews and we loved Acorn’s Summer Pale, Salopian’s Darwin’s Origin, and both beers offered by our neighbours from Thames Side in Staines – Black Swan Porter and White Swan American Pale Ale.

We then moved to Binnenhof ( a Dutch word meaning Inner Court) – a bar serving great European beers from kegs or in bottles. The range of Dutch and Belgian beers was comprehensive and there were so many new to us breweries – Alvinne (Belgium), De Graal, Struise Brouwers (all from Belgium); Butchers Tears, Kaapse Brouwers, and White Dog (Netherlands) to name a few amongst the many. However, we were astonished by the newcomers from Italy and Malta – such as Alder (Italy), Lord Chambray (Malta), Hammer(Italy), Klanbarrique (Italy), and many more.

Slightly tipsy, we moved to the next international bar, Brandenburg Gate. As the name suggests, it featured not only traditional beers from Germany – such as Andechs and Ayinger (that we had proudly included in our portfolio), Fruh, Hofbrau, Jever, Lowenbrau, Maisels, etc.; but some Czech and Austrian brews too – Bad Flash, Masa, Matuska, Permon, Strahov and Uneticky Pivovar ( all from the Czech Republic) as well as Stiegl (hailing from Austria). 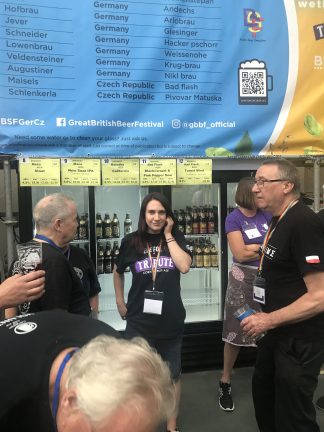 The other international bar that we paid special attention to was the Statue of Liberty bar. The presence of US beers at the Great British Beer Festival has always been very strong and this year was not disappointing at all. There were so many serious beers to try and all served from cask using just gravity. Our favourites there were Coffee Marzipan Gunner’s Daughter Milk Stout by Mast Landing Brewing Company (USA) and Lowlands American Style Brown Ale by Tributary Brewing Company (USA).

After that, we quickly visited the Cider and Perry Bar. It was our last stop so we took it easy and paced ourselves knowing the danger these drinks possess to even experienced humans. We loved Salted Caramel by Dudda’s Tun Cider, Katy Perry (Pyder) by Purbeck Cider Company, Marmalade by Seacider, Vintage by Taunton, Dabinett by Temple Cider, and Lazy Days Perry by Ty Bryn. A lot can be written about cider alone so we promise to dedicate our next blog post to that traditional drink and stock some at TippleHub too.

After our visit to the Cider and Perry Bar, we headed to Maidan Square where we took some bottles to go out of the extensive choice of bottled beer from Australia, New Zealand, Latvia, Romania, Sweden, Finland, Denmark, Norway, Poland, and Estonia. Fulfilled with joy and smiling with happiness, we made our way home.

Category: Uncategorized
We use cookies on our website to give you the most relevant experience by remembering your preferences and repeat visits. By clicking “Accept All”, you consent to the use of ALL the cookies. However, you may visit "Cookie Settings" to provide a controlled consent.
Cookie SettingsAccept All
Manage consent

This website uses cookies to improve your experience while you navigate through the website. Out of these, the cookies that are categorized as necessary are stored on your browser as they are essential for the working of basic functionalities of the website. We also use third-party cookies that help us analyze and understand how you use this website. These cookies will be stored in your browser only with your consent. You also have the option to opt-out of these cookies. But opting out of some of these cookies may affect your browsing experience.
Necessary Always Enabled
Necessary cookies are absolutely essential for the website to function properly. These cookies ensure basic functionalities and security features of the website, anonymously.
Functional
Functional cookies help to perform certain functionalities like sharing the content of the website on social media platforms, collect feedbacks, and other third-party features.
Performance
Performance cookies are used to understand and analyze the key performance indexes of the website which helps in delivering a better user experience for the visitors.
Analytics
Analytical cookies are used to understand how visitors interact with the website. These cookies help provide information on metrics the number of visitors, bounce rate, traffic source, etc.
Advertisement
Advertisement cookies are used to provide visitors with relevant ads and marketing campaigns. These cookies track visitors across websites and collect information to provide customized ads.
Others
Other uncategorized cookies are those that are being analyzed and have not been classified into a category as yet.
SAVE & ACCEPT